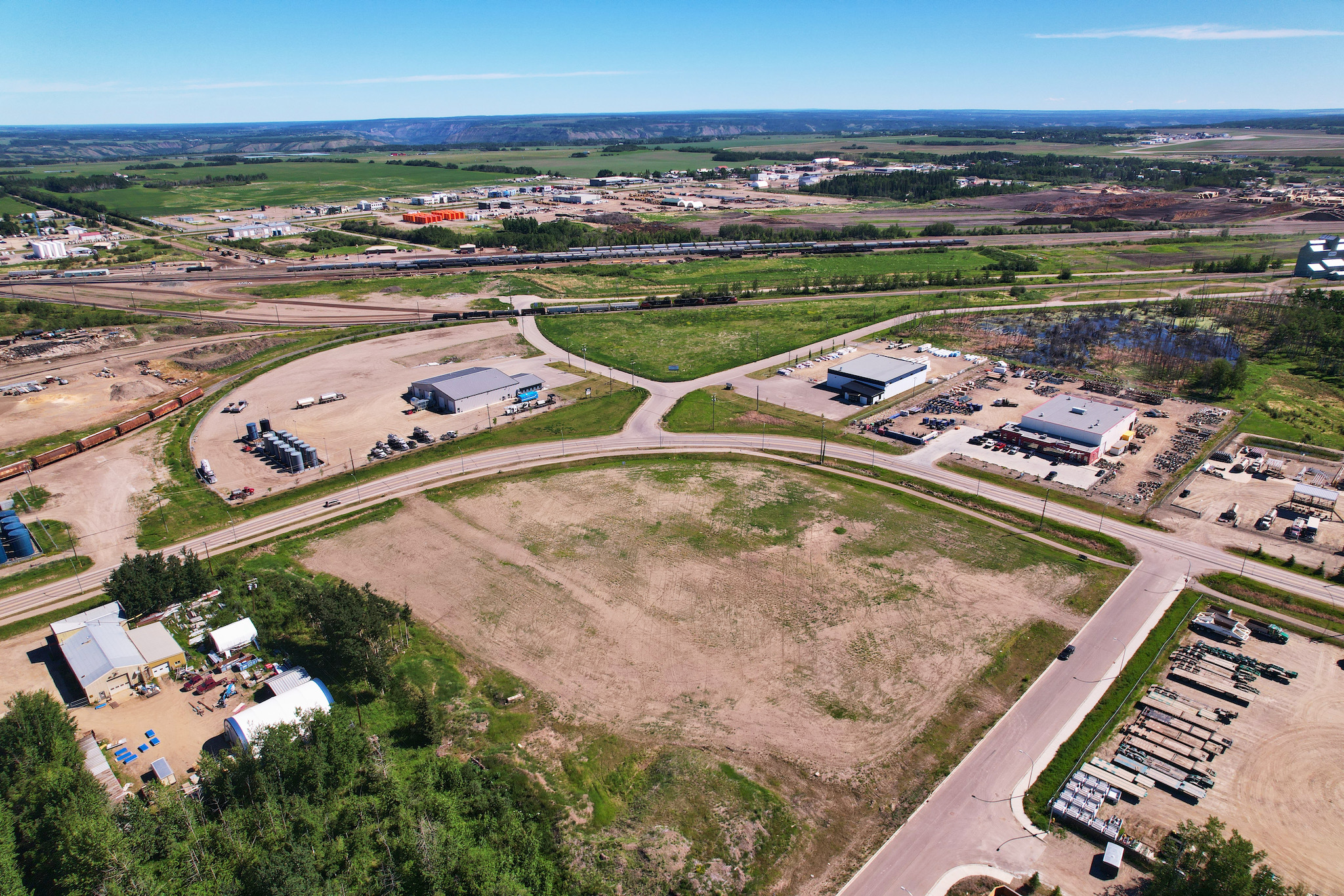 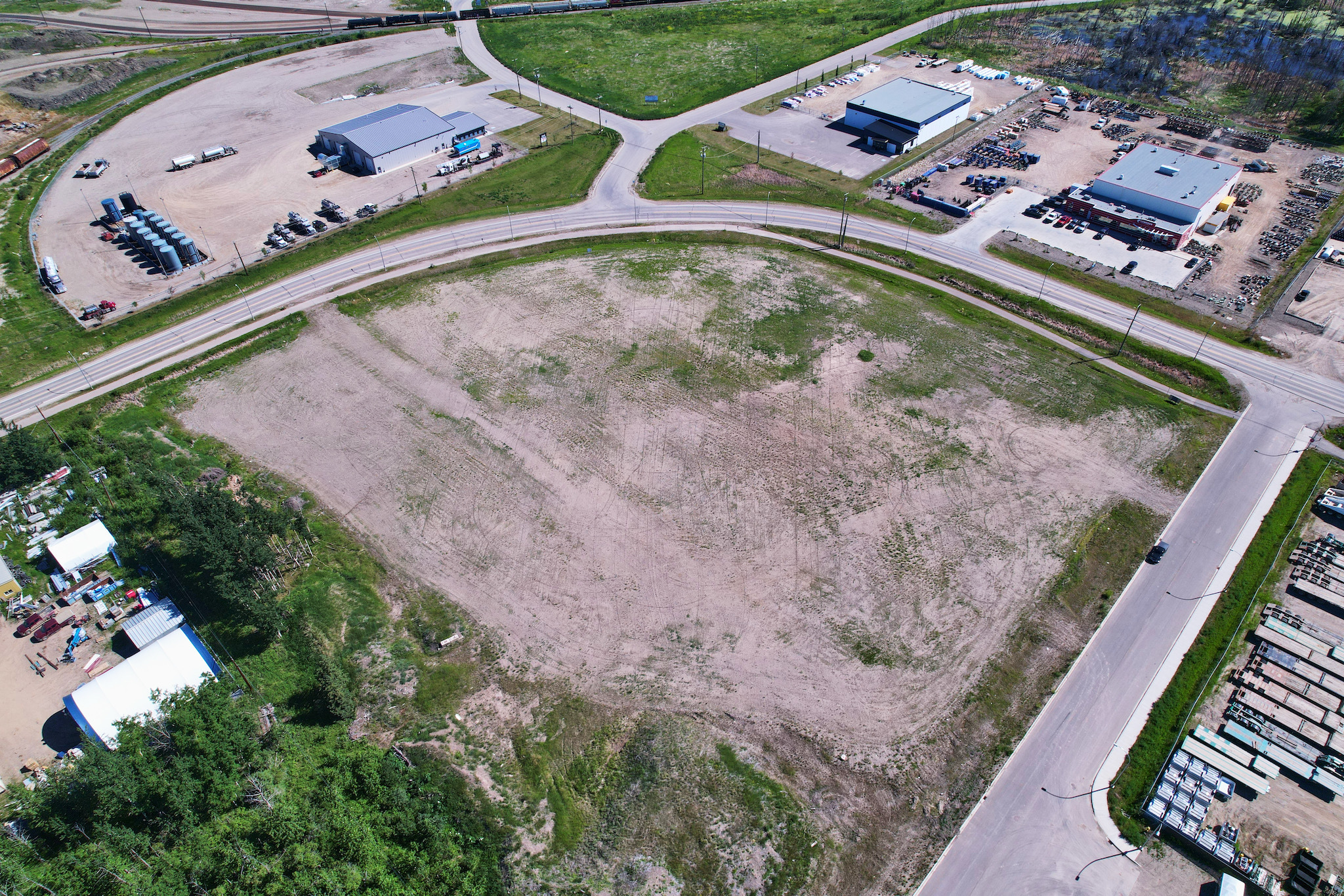 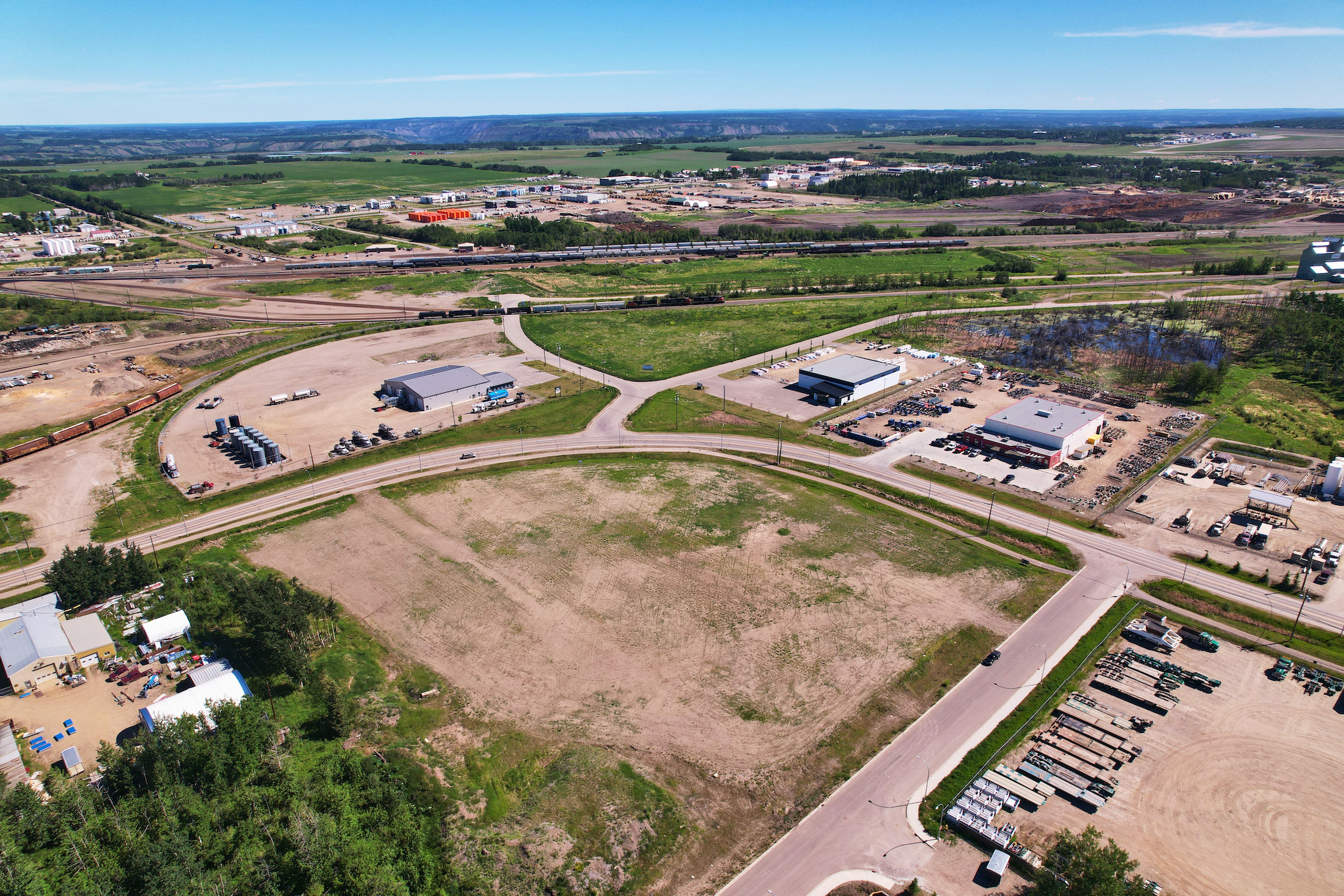 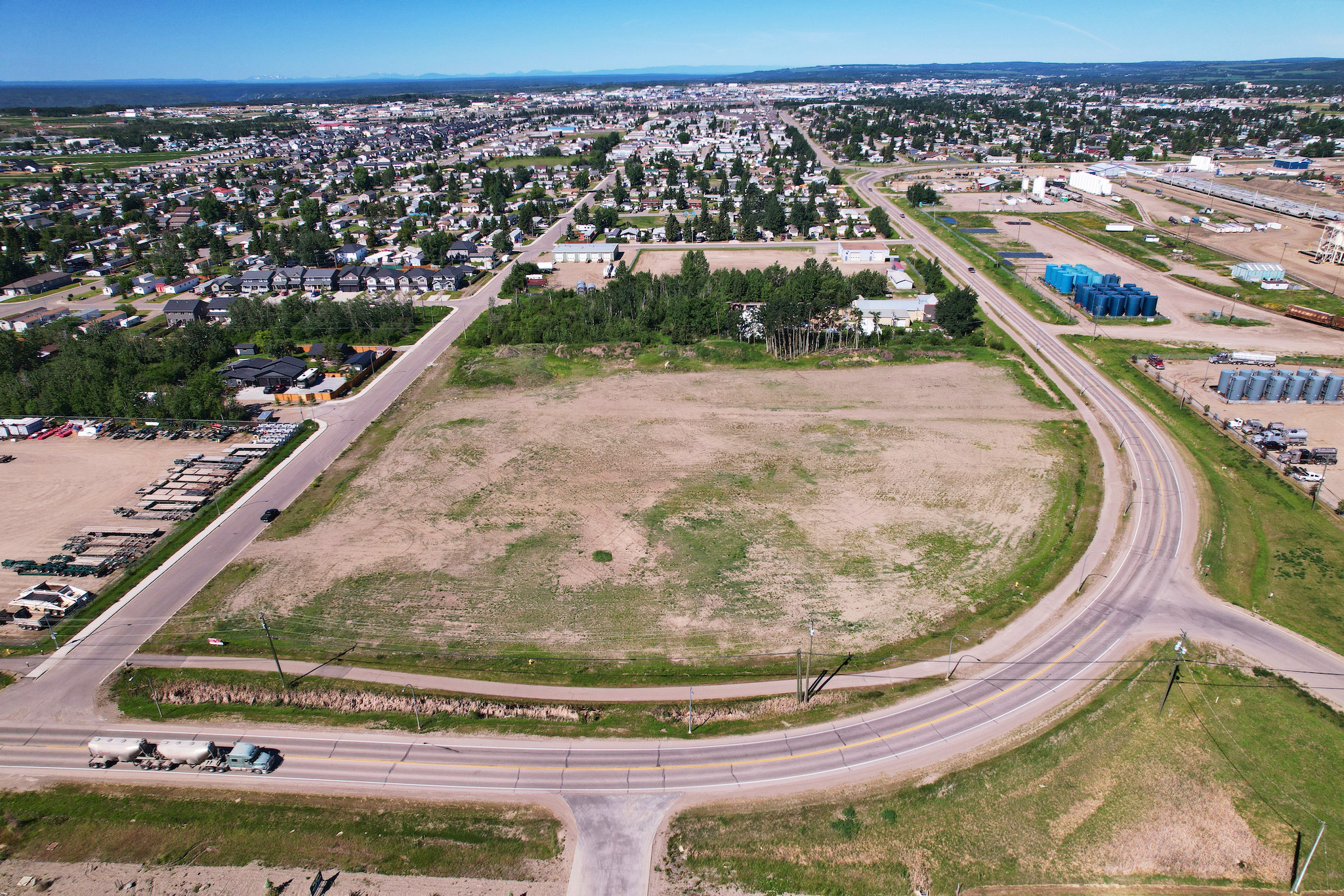 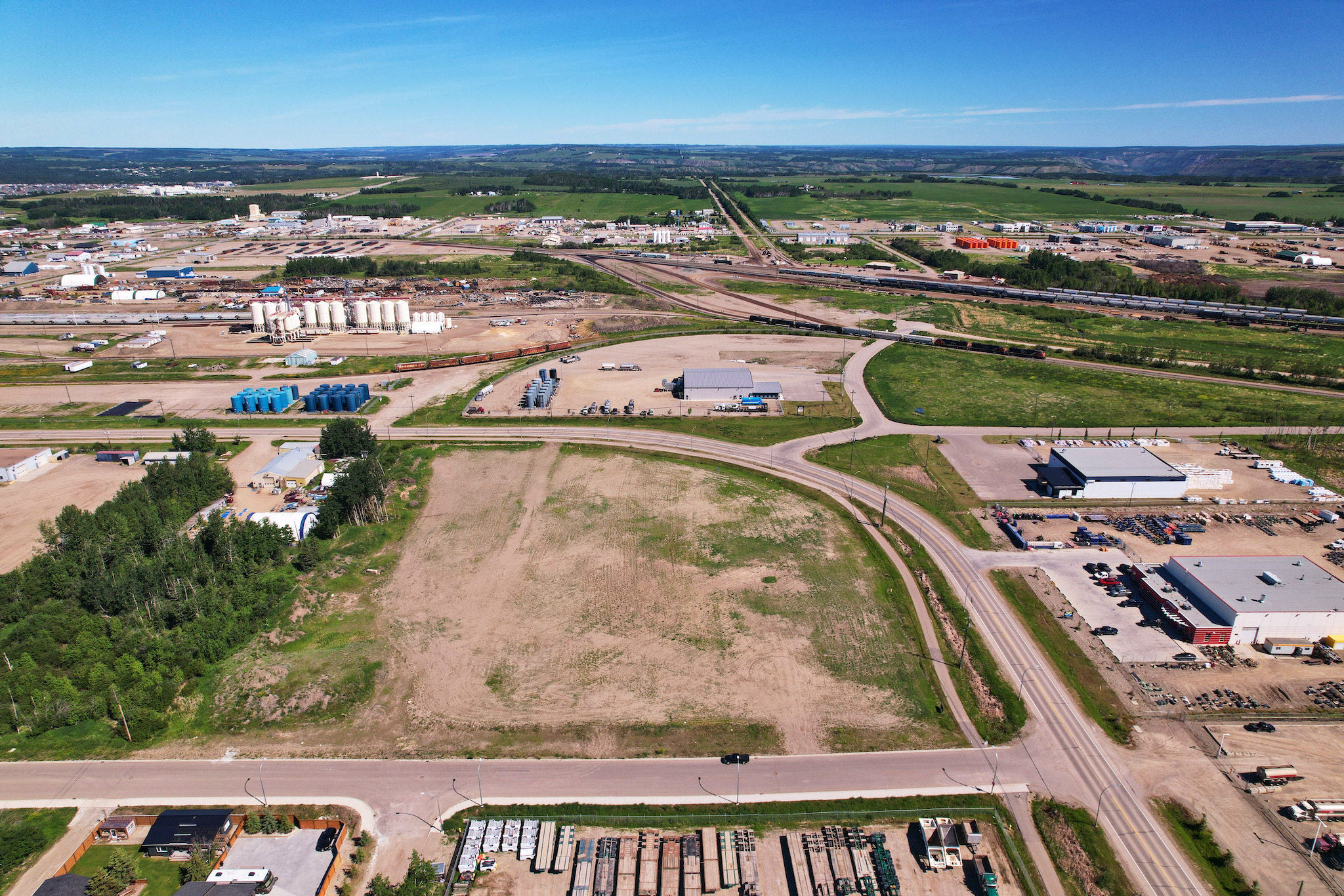 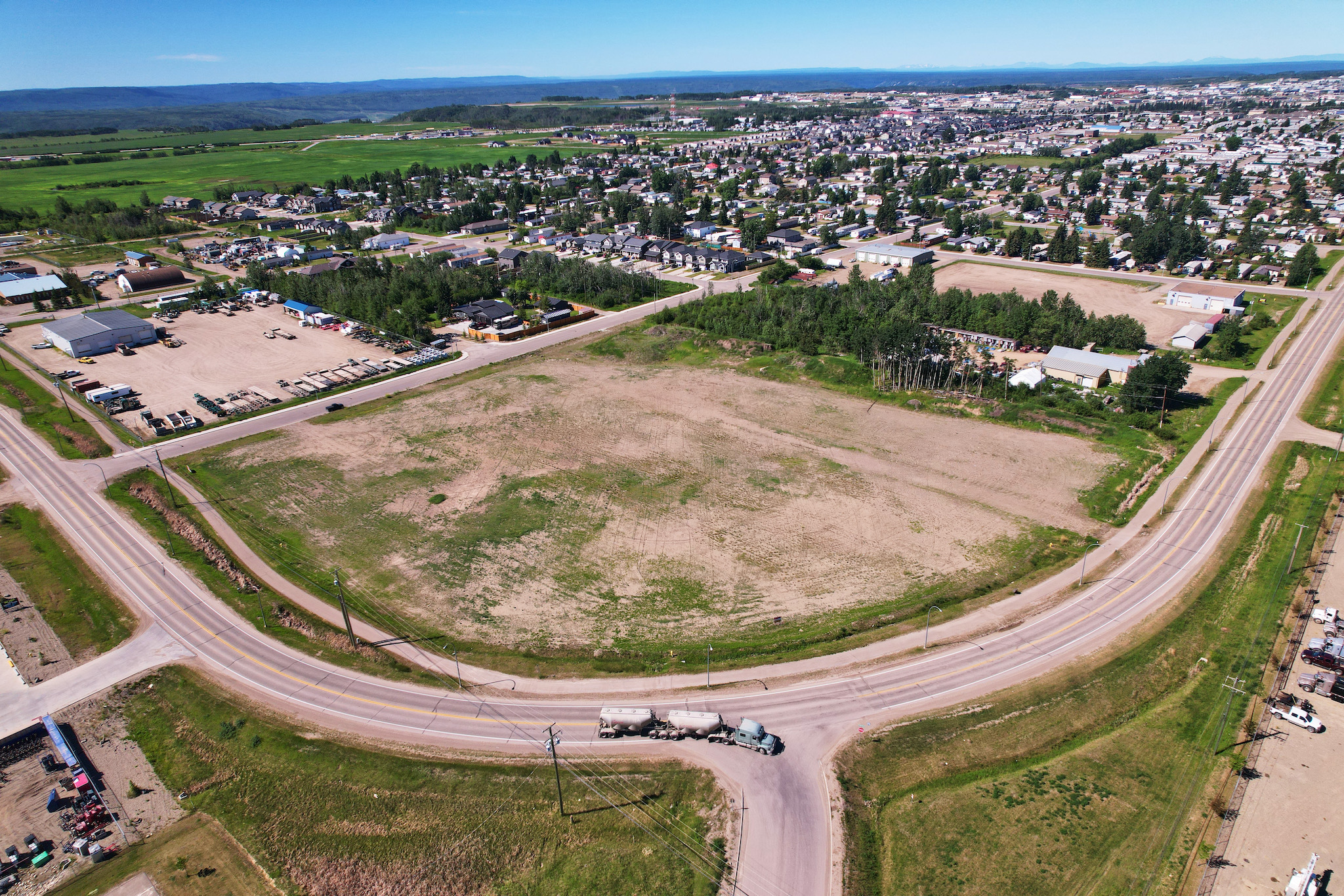 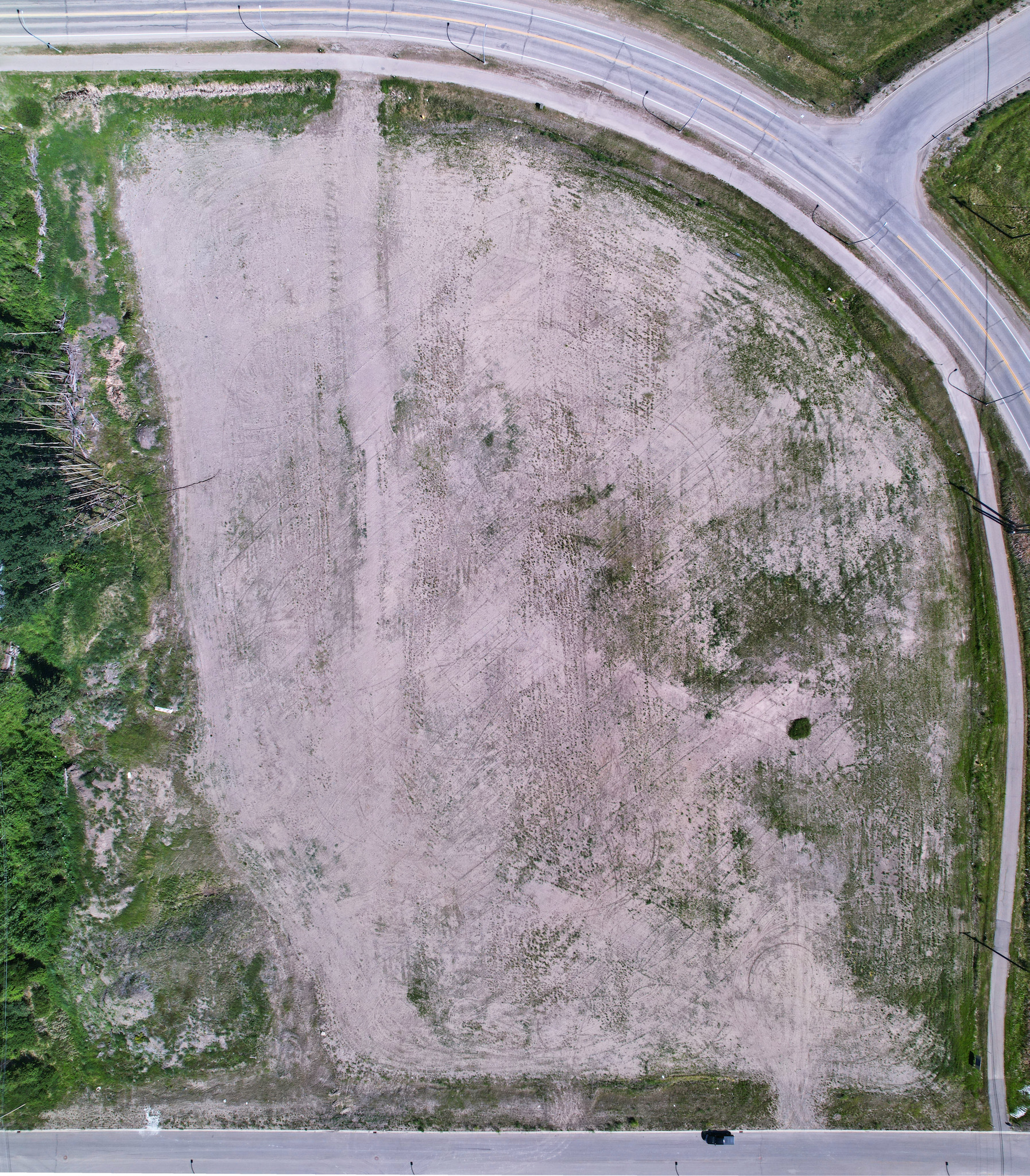 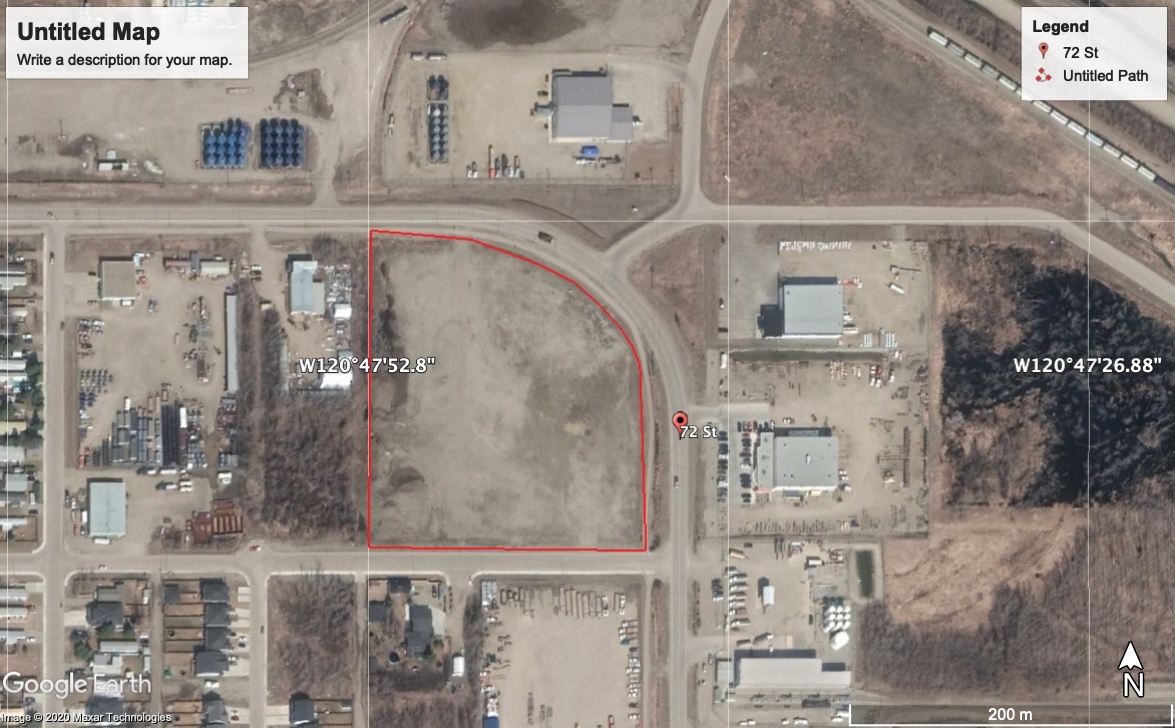 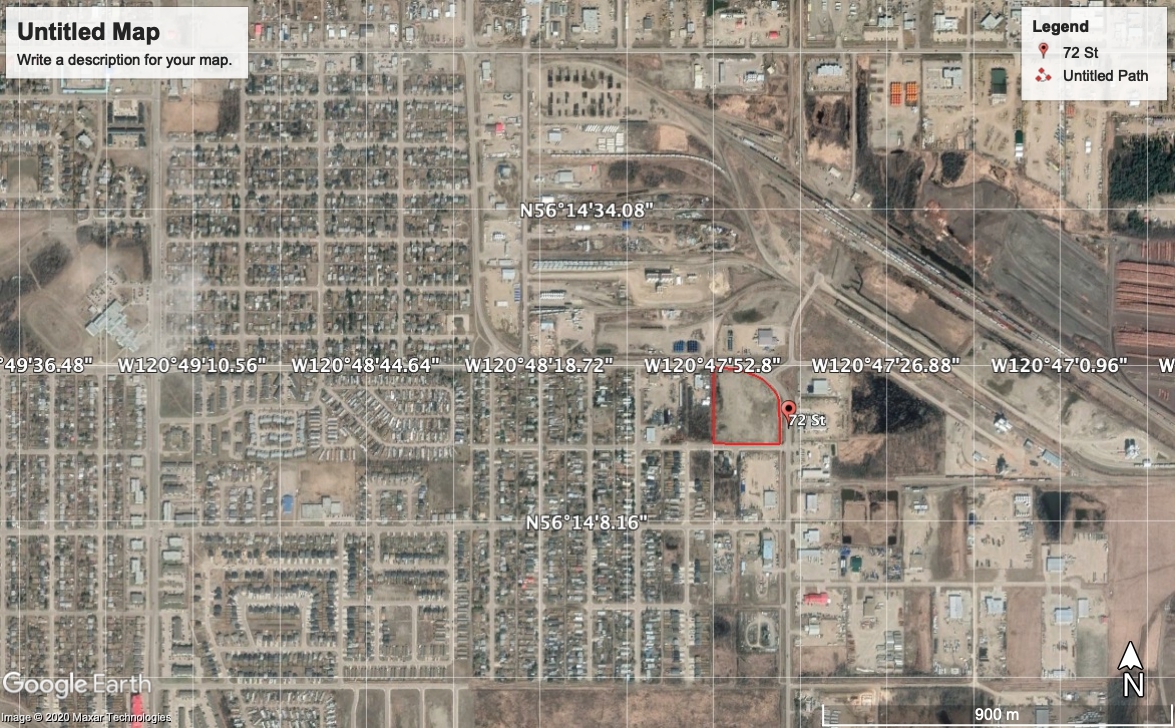 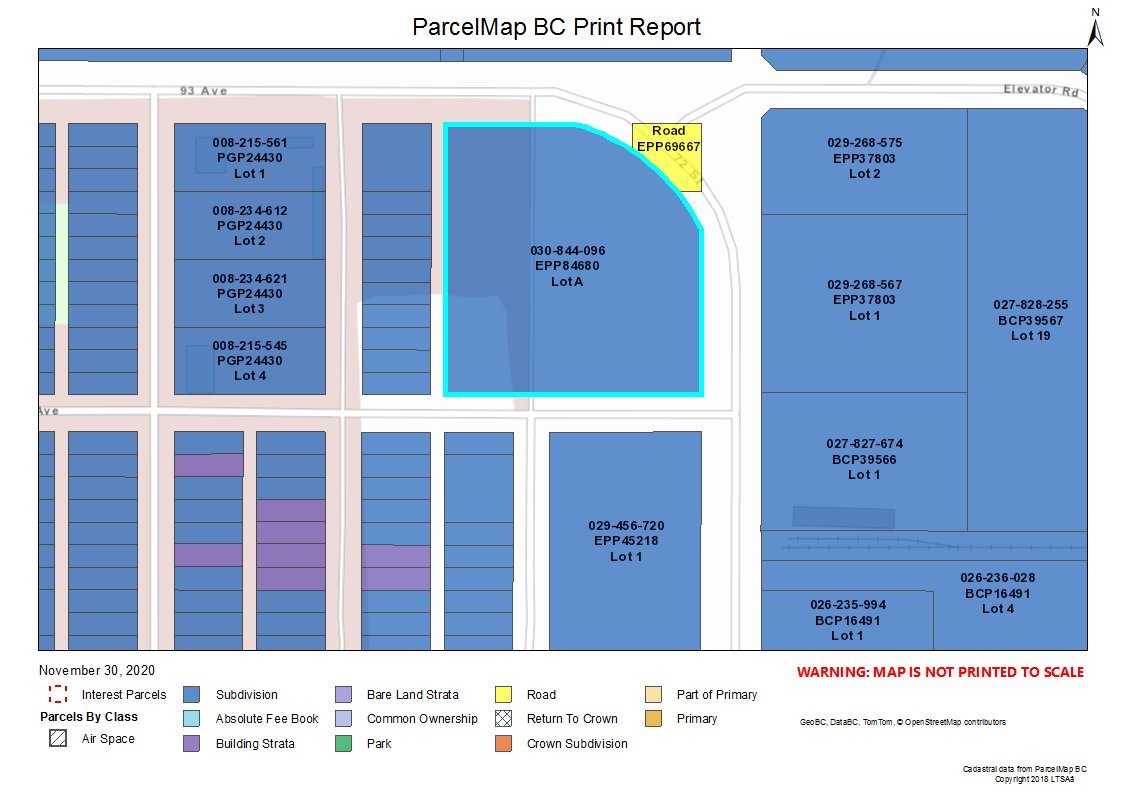 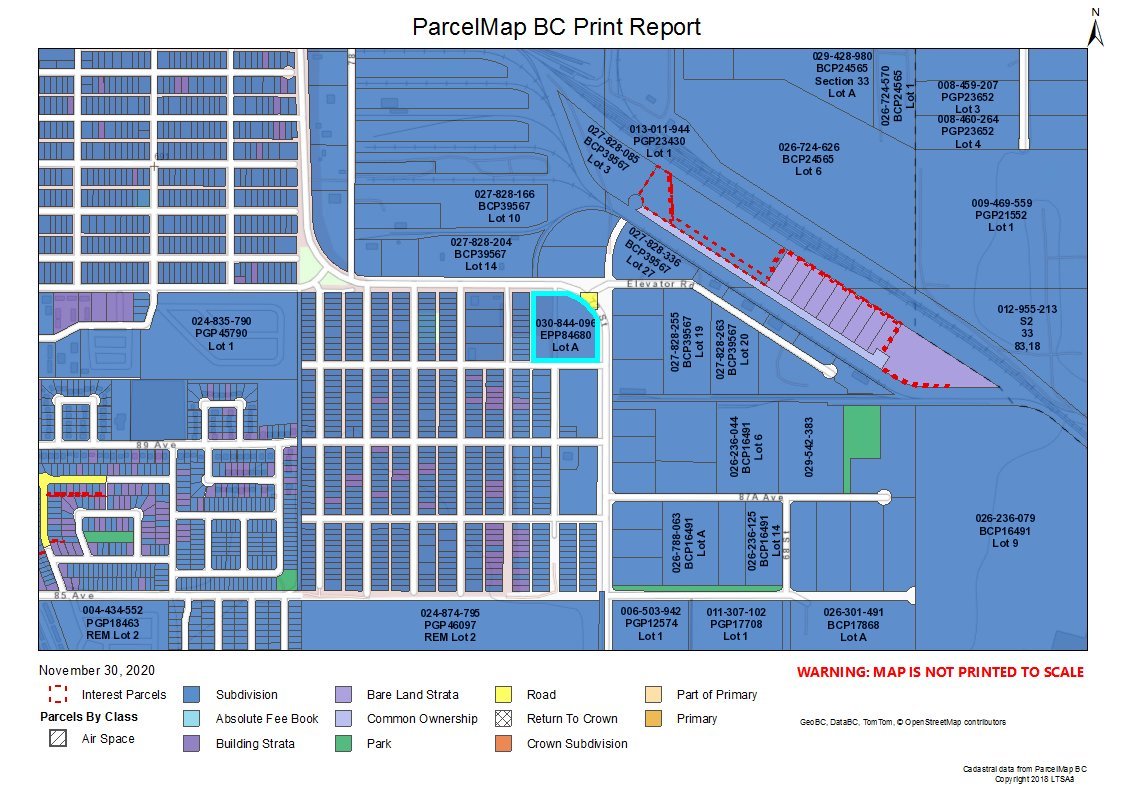 
This 7.07 Acre high exposure commercial building lot is located in a rapidly developing area of Fort St. John.  All services are available at the lot line; hydro, natural gas, sewer, phone. An exceptional location just 10 minutes from North Peace Regional Airport, 5 minutes to the Alaska Highway and 8 minutes to the Walmart SuperCentre.

Multifaceted wide use C4-Highway Commercial zoning allows for diverse development combinations. This property title can be subdivided into four lots giving flexibility to part a parcel if need be. There is road access from three sides, the lot is relatively level with a gentle overall slope to the south. Frontage on the east side on the paved Northern Lights Drive (East By­ Pass Road), access on the south side to 91 Avenue and has highly visible frontage on the east and north sides of Northern Lights Drive.

The subject neighbourhood consists of a service commercial/ industrial area situated on the southeast extremity of the city of Fort St John. The site is bounded on the west by Northern Lights Drive (East By­ Pass Road), on the north by 100 Avenue, on the east by Swanson Lumber Road and south by the Alaska Highway.

Northern Lights Drive (East By-Pass Road) is an arterial road and truck route that bypasses the city's central areas. It connects with 100 Avenue on the north and the south side, with the Alaska Highway. The Highway is the main route in the region and links with centres to the north and south. One-Hundredth Avenue is one of the main city thoroughfares.

Developments on the west side, bordering Northern Lights Drive, are a mix of light industrial and service commercial. Areas just west are residential. The south portion along Northern Lights Drive consists of more extensive, undeveloped tracts and includes a transitional space that has recently been amalgamated into the city.

Balance of the neighbourhood is given over to industrial facilities, including Peace Valley OSB plant, Canfor lumber mill and CN Rail marshalling yards/ station plus industrial zoned subdivisions.

The subdivisions are located in an area that was formerly part of the BC Rail site. When BC Rail was sold to CN Rail, most of the regions around the marshalling yards were retained by BCR Properties. Starting in approximately 2005/ 2006, BCR Properties began developing subdivisions consisting of industrial

The subdivisions are relatively recently developed. They are fully serviced, and the streets are paved and have concrete curbs. Internet and cable television services are available in the area.

Some of the sites had pre-existing improvements. Several of these were serviced by rail spurs and load-outs, with the railway charging an annual land rent. The building owners typically took up these sites. The majority of the balance of the new areas were vacant and undeveloped at the time of sale.

The lots have typically been developed with shop/ warehouse-type buildings with varying degrees of office finish. Some of the sites have been cleared and levelled and are utilized as open storage. The majority of area streets are paved. The neighbourhood has good traffic flow, and sites are readily accessible. There is good access to the area's main thoroughfares and highways.

Fort St. John is located on the traditional territory of the Dane-zaa First Nation people. Over the 19th and 20th centuries, the settler community has been moved a number of times for varying economic reasons. The present location is thought to be its sixth. The original trading post built in the area was named Rocky Mountain House (not to be confused with the modern Alberta town by that name). It was established one year after Sir Alexander Mackenzie explored the area in 1793. One of a series of forts along the Peace River constructed to service the fur trade, it was located southwest of the present site of Fort St. John. The Dane-zaa and Sikanni First Nations used it as a trading post. It was also used as a supply depot for further expeditions into the territory. The fort closed in 1805. Fort d'Epinette was built in 1806 by the North West Company. It was renamed Fort St. John in 1821 following the purchase of the North West Company by the Hudson's Bay Company. This fort was located about 500 metres downstream from the mouth of the Beatton River, which at that time was known as the Pine River (d'epinette in French). It was shut down in 1823. The site was designated a National Historic Site of Canada in 1958.[2][3]